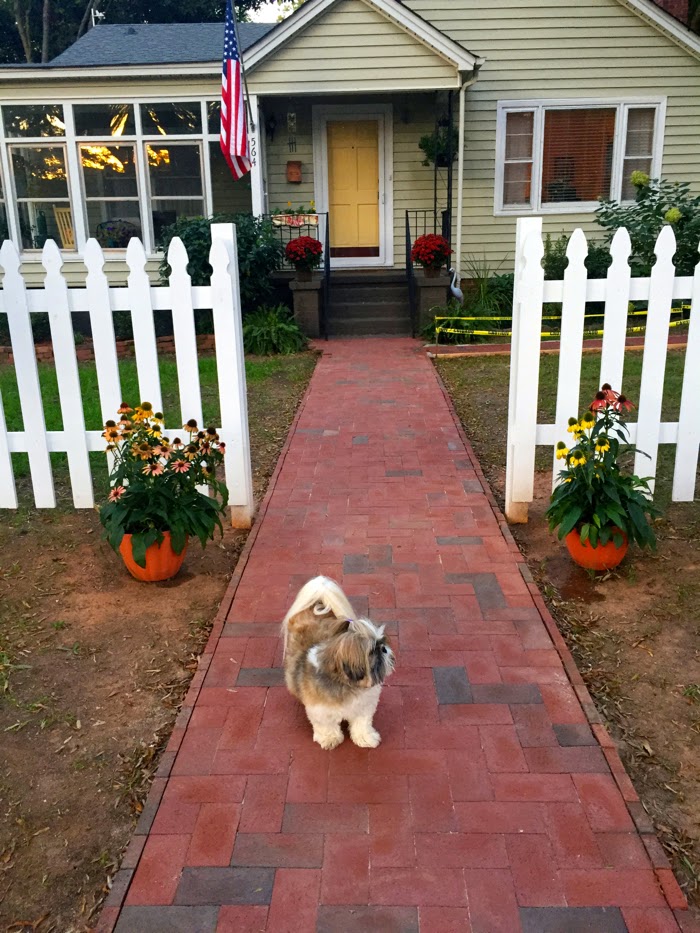 We have spent the last several months working on our front yard, Emily included. (Well, OK, Emily has mostly just sat around looking cute, but that’s pretty much the extent of her contribution to everything.) There is still quite a bit of work to be done, but I thought I would show you how it’s coming along so far.
Below is the before photo. Note the old bushes, the sidewalk leading to the front door, the red paint on the foundation under the porch, the lack of grass, etc. We had to have a dying 100-year-old oak tree removed from the left side of our front yard, unfortunately, and in the process the grass in the front yard basically got destroyed by all the heavy machinery. 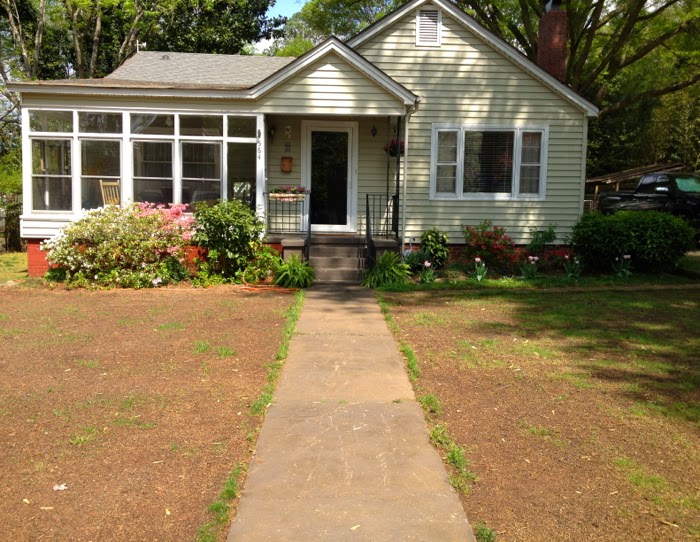 Below is the corner where the tree used to be. 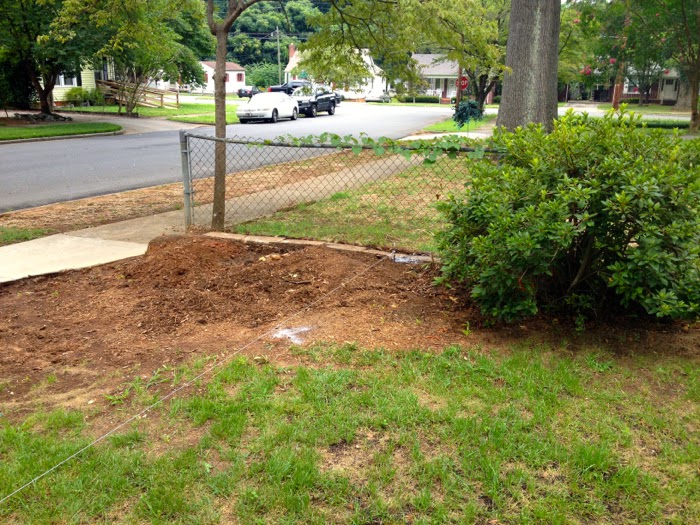 The first thing we did was plant grass ~ not the smartest thing to do in the spring in the Carolinas, but we had little choice. Luckily some of it grew (though we’ve reached the point again where it has to be redone for real). The next thing my husband did was cover the old sidewalk with brick pavers, which took him forever since he did the mortar, cutting, etc., all by himself. We also took out the ancient, woody azaleas in front of the porch ~ they were quite spindly ~ and replanted and reshaped that bed, along with the one on the other side. 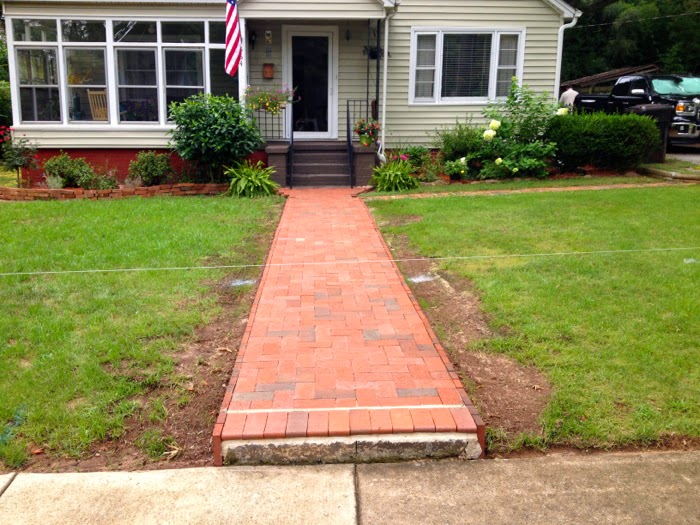 Then my husband decided to start working on building a picket fence, partly for looks but mostly to keep Miss Emily in the yard where she belongs. (She has this terrible habit of wandering off if you turn your back on her for 10 seconds.) 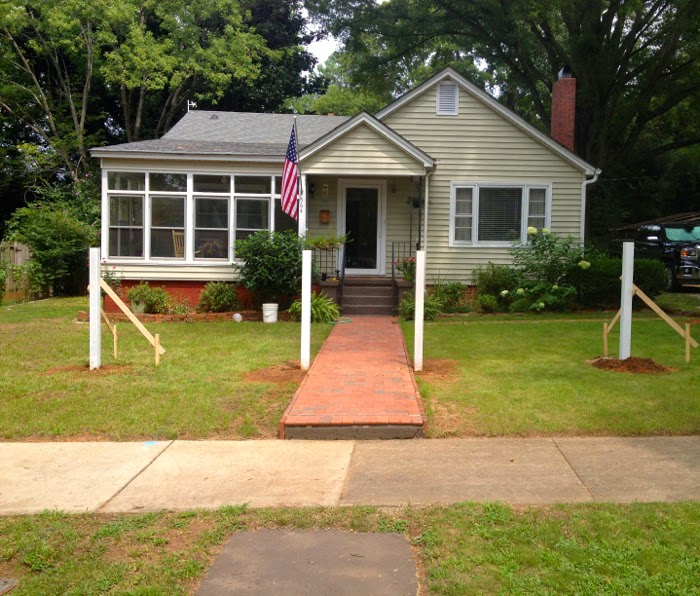 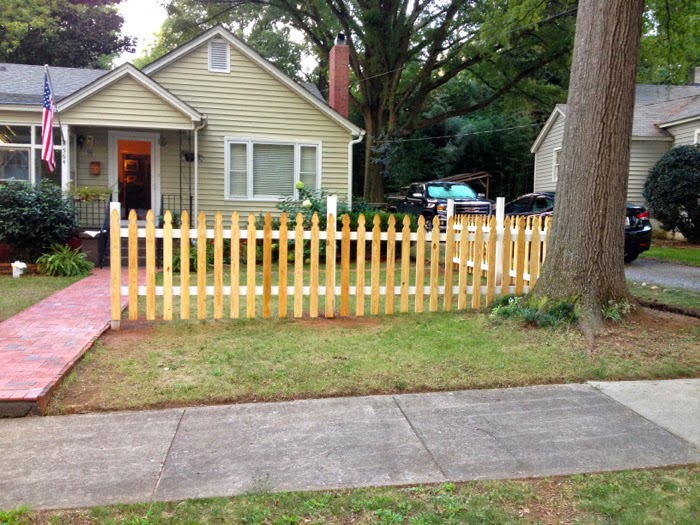 While he was working on the fence, I kept tackling the various flower beds in the yard. This one along the side fence really needed some attention. Here’s the before: 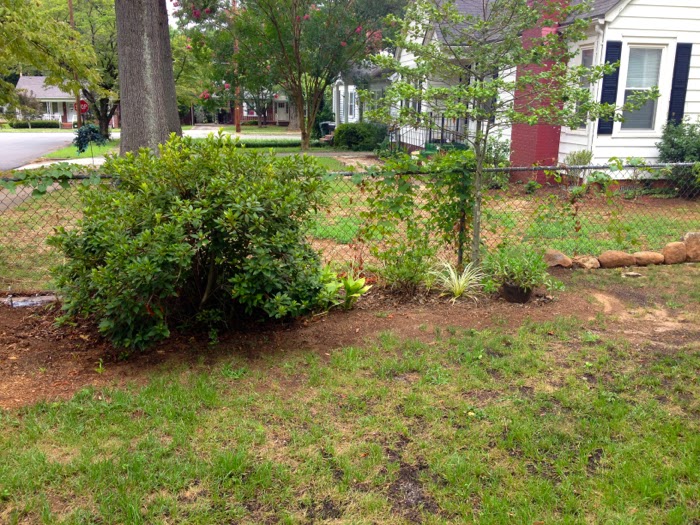 And now, the after. We have a bunch of old bricks laying around the yard, so I made it a point to repurpose them. I enlarged the bed and curved it to provide some interest. Much better, isn’t it? 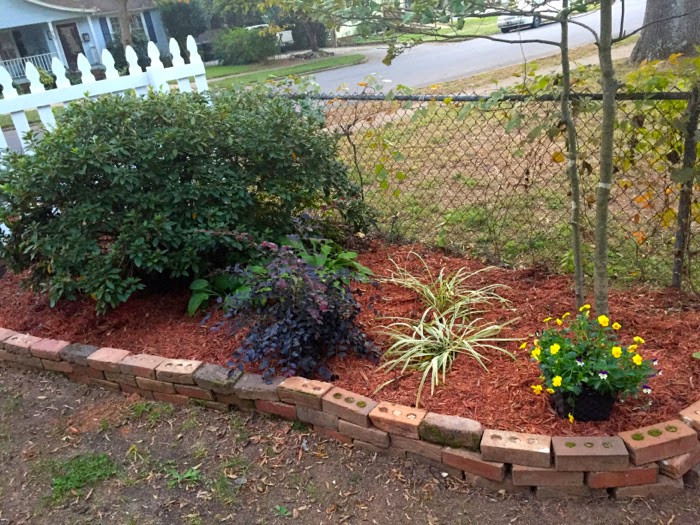 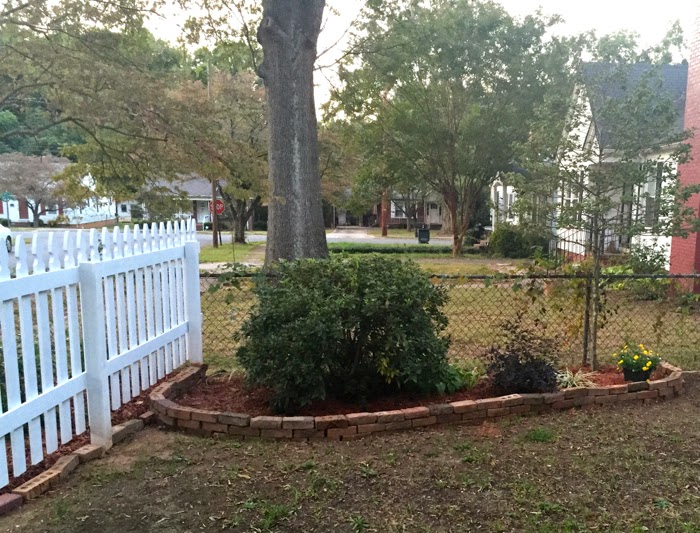 Below is the new, reshaped flower bed in front of the porch. I also scraped the peeling red paint off the brick and painted it to match the front step. It looks much better. 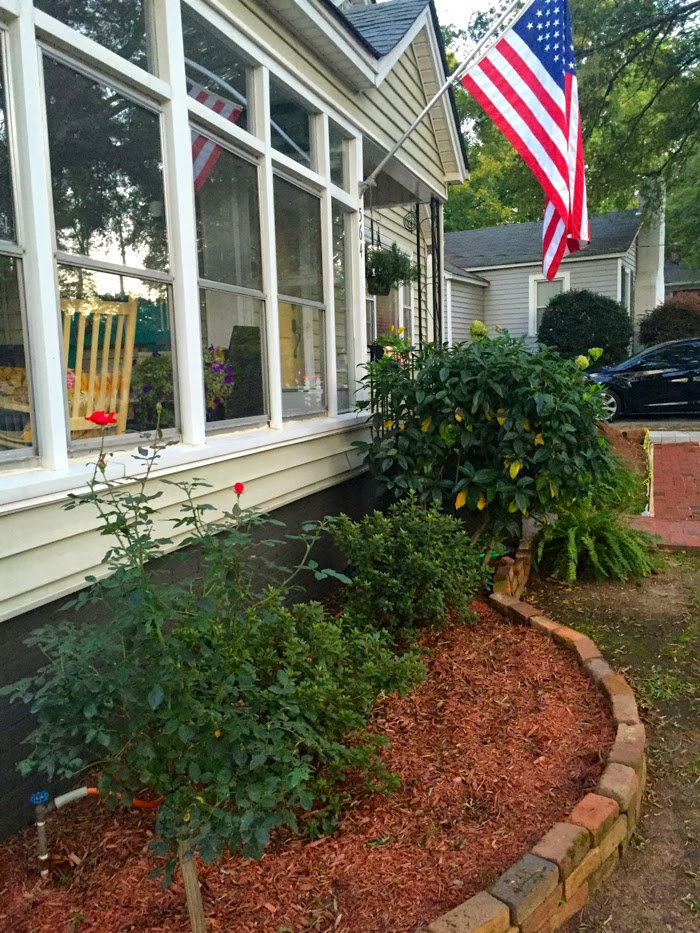 A shot of the almost-finished picket fence, now painted white with primer. 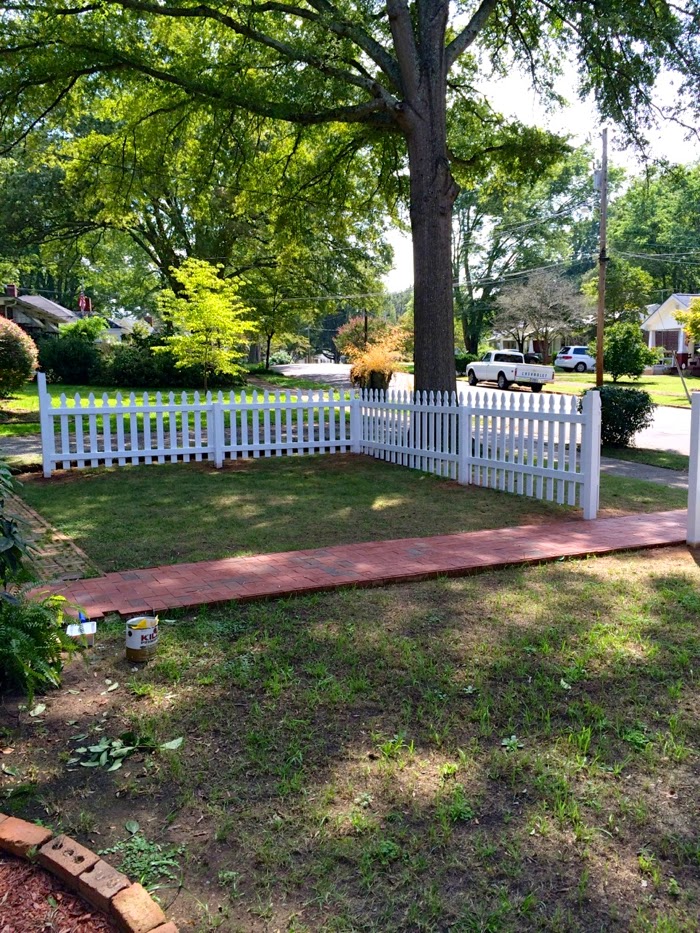 With the picket fence nearly finished ~ all that is missing is two gates and one more portion on the other side of this walkway ~ my husband decided to stop work on the fence to go ahead and redo the walkway. Because he planned on moving the walkway and widening it slightly, he wanted to get that in place first before he built the fence around it. 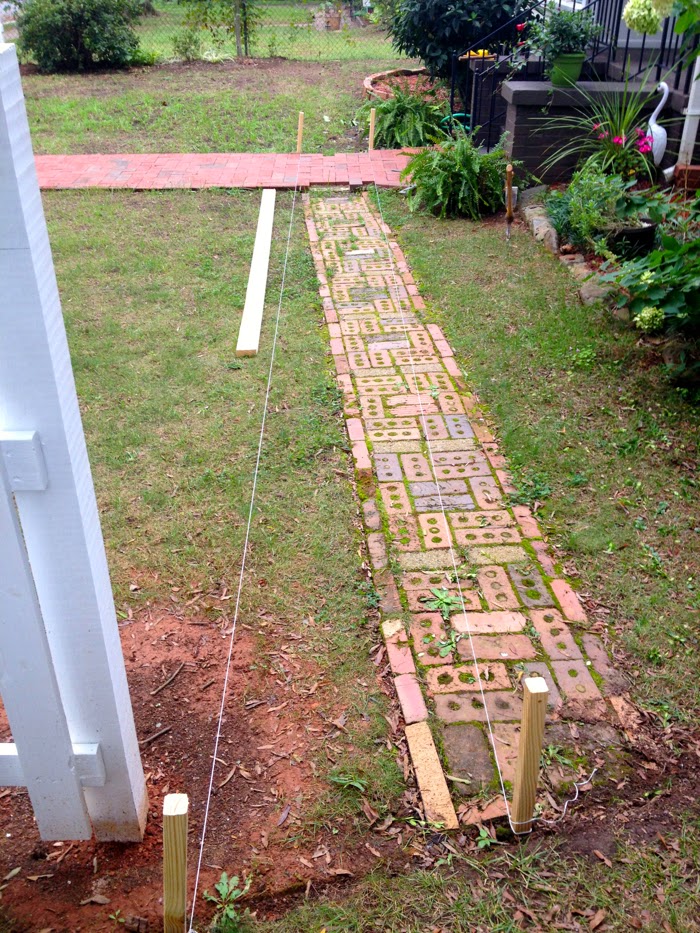 Below is the walkway nearly finished. You can see he has work to do on the step and landing near the driveway, and he still has to put in the trim bricks (that wood will come out). Once that is done, he’ll be able to finish the fence. 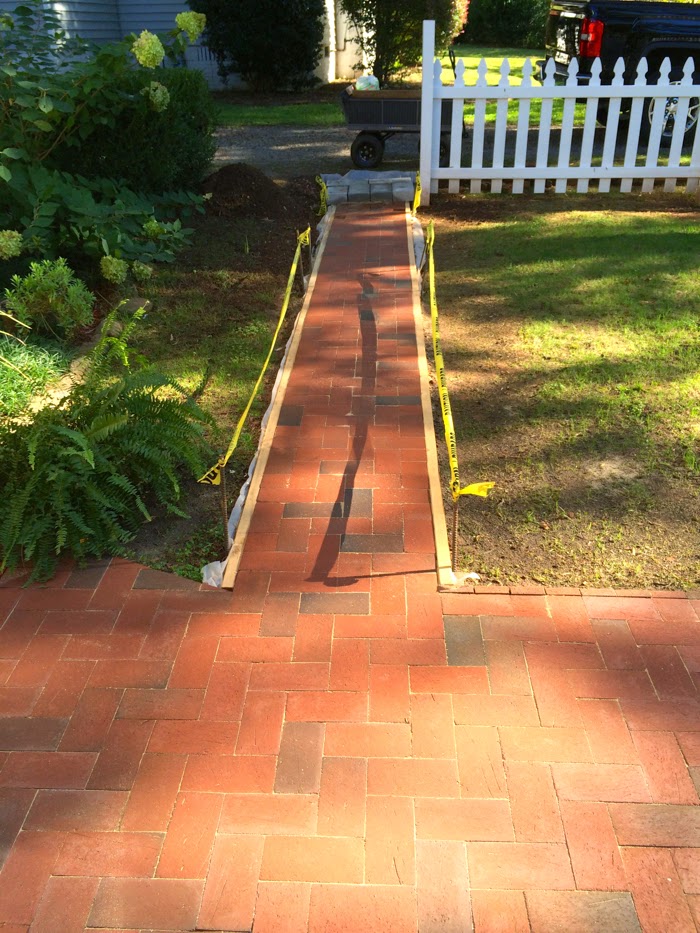 Due to the remaining large oak tree in the front yard and the gas/electric lines, we had to put the fence back off the sidewalk a good distance. Which means, of course, more landscaping. In the photos below you can see what we’ve done so far. Other than planting some additional bulbs along the walkway, this is probably going to be all the landscaping we’ll do this fall. Once spring comes, I will do a bit more. 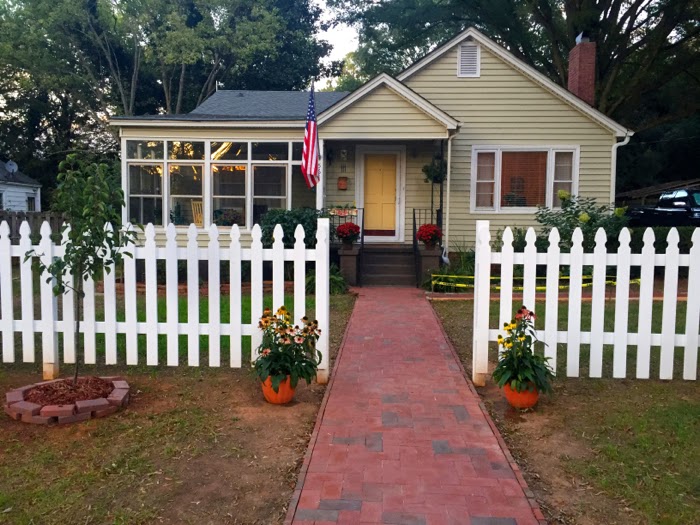 In the photo below is the corner where the old oak tree we had removed used to stand. I planted some shrubs that will grow into a nice hedge in that corner and some flowers in the front. We also planted a flowering dogwood tree and a couple of gardenia bushes.
One of the problems we discovered in digging the holes for fence posts and plants is the over abundance of tree roots. We live in an older neighborhood with all these giant, fabulous trees, but that also means there are tree roots everywhere. And I do mean everywhere. It makes digging and even tilling the ground an absolute nightmare. 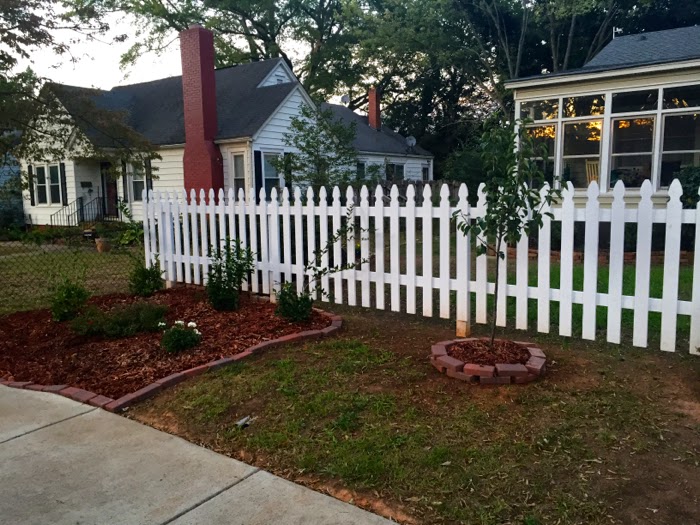 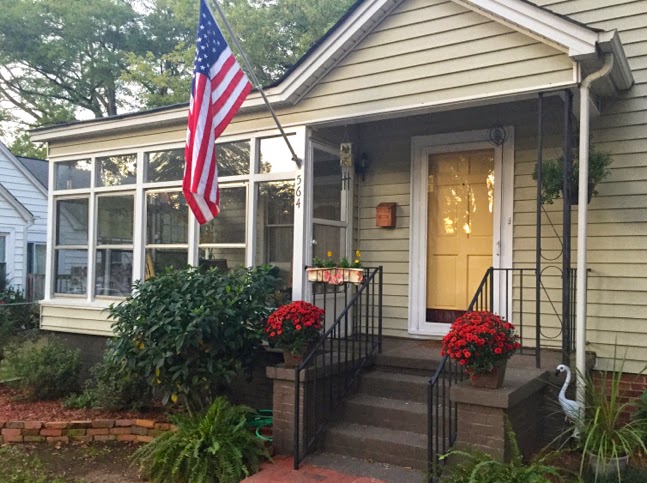 Before the weather gets cold, my husband plans to finish that one walkway, the fence and the two gates. We also have to get the fence painted. If he has enough time (but I kind of doubt it), he still has one more walkway to build ~ this one will be off the main walkway on the other side, running around the curved flower bed in front of the porch. And we also have to do something about the grass.
But so far, so good. What do you think? 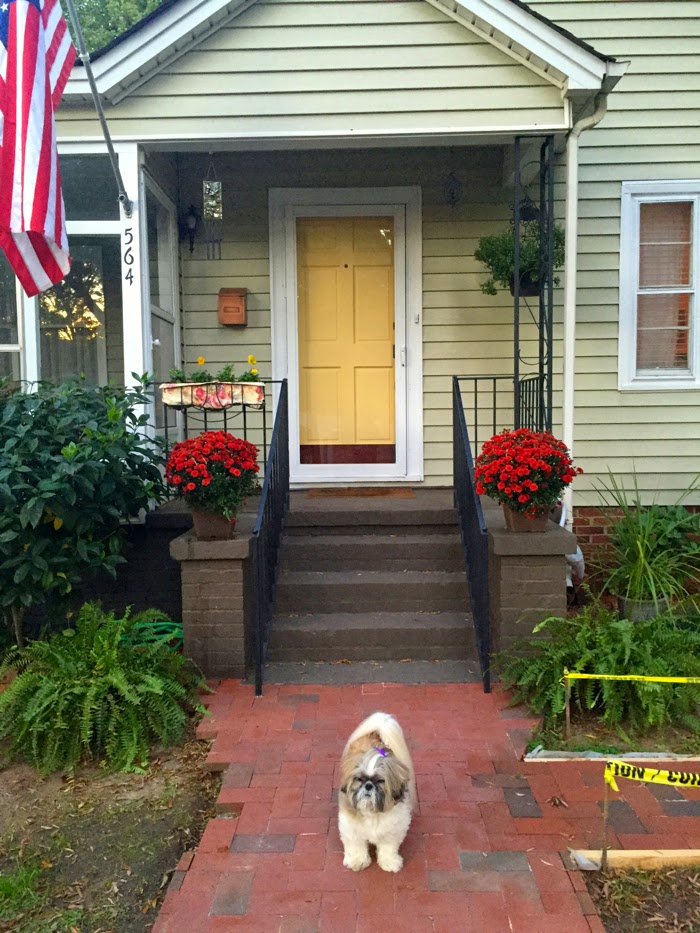 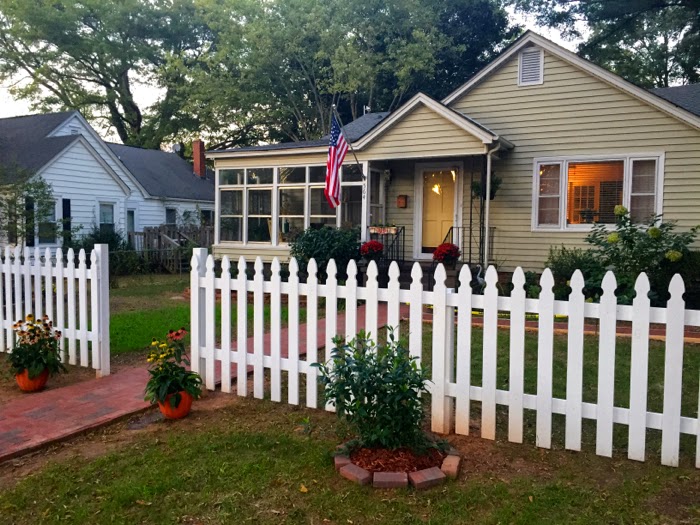 
Photos by The Art of Living Beautifully
Labels: Before & After Wednesday garden Home and Garden Thursday home redo Make it Pretty Monday Outside Yard yard renovation You're Gonna Love It Tuesday

Thanks so much for stopping by! Please note that if you don't see your comment immediately, it isn't lost. I have turned off the terrible word verification process, but to cut down on spam, I now have to approve all the comments.

Eileen
United States
I’m a professional writer, editor and designer who believes that choosing to surround yourself with beauty really does make a difference in life. I hope you’ll find something to inspire you at one (or both) of my blogs, whether it’s one of my fabric or wallpaper designs at The Pink Home, or an idea for adding a little beauty to your life at The Art of Living Beautifully.

Need more beauty in your life? Follow this blog.

Friends of The Art of Living Beautifully